when i threw my first avatar into second life over a decade ago it was kind of a pop thing. one of the first memories i have is standing on a hill together with numerous others and watching the infamous penis cloud pass by. i was deeply fascinated by the creative potential SL had to offer. everybody could create everything. to the present day i never created something but spent lots of time exploring.

the public lost interest in SL pretty soon and it got even more interesting for me. huge parts still lie idle and abandoned, which makes it the perfect virtual refuge from time to time. it’s still alive and there’s life to be noted indeed – a playground for nerds and (now for the bright side of the medal) artists. metaverse art is the key word.

i still want to have a second home, i think – or better: nerd me thinks. a tiny, dystopian and walden-like shelter somewhere nice. still looking for the perfect spot, and probably keeping on doing that for the rest of my life.

adalbert, my fellow avatar for almost 10 years now, currently looks like a mixture of magritte’s son of man without the apple and a mildly minded german official from the 1920s. but his life wasn’t too boring at all as he 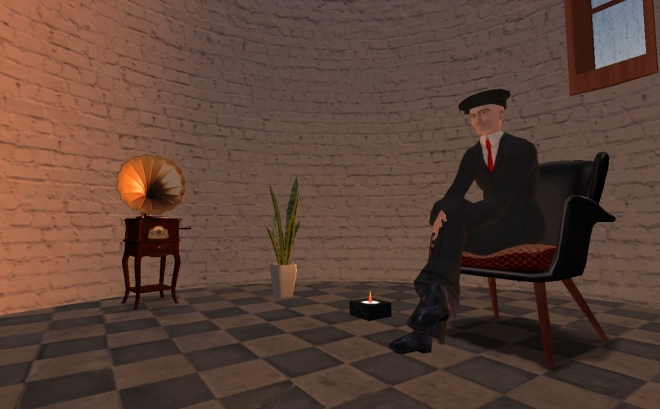 bloggers know: nothing is too banal to be mentioned here. this is a rather personal thing anyway…

activities with no productivity purpose were considered a waste of time a bit too long – with known results in the end. (basic) lessons we learn, or: he that will not hear must feel. so let’s focus on exact those (all meditative) activites – vacation plans:

Some pearls out of the ocean of netlabel releases

Virtual space for the Metaverse Art